Coming up with ways to tackle water and air pollution may seem like a challenging task, even for the experts. However, Samsung’s Corporate Citizenship programs have seen brilliant young students from across the globe successfully address some of the most pressing issues facing their communities.

To encourage interest in STEM (Science, Technology, Engineering and Math) areas among students, Samsung has been running Solve for Tomorrow in more than 20 countries since its inception in 2010. Originally launched in the United States, this program supports students as they independently seek to identify and address social issues in their communities, while also learning how science and technology can be harnessed for the betterment of society.

Samsung Newsroom went to find out about some of the major issues that students have sought to tackle through the program this year.

Medellin, the second largest city in Colombia, is known as the ‘city of eternal spring’ for its warm weather. However, this beautiful city has recently been suffering from severe air pollution. That is because Colombia consumes more than 1,000 tons of coal annually, emitting a tremendous amount of CO2 that affects not only Colombia, but the whole world. 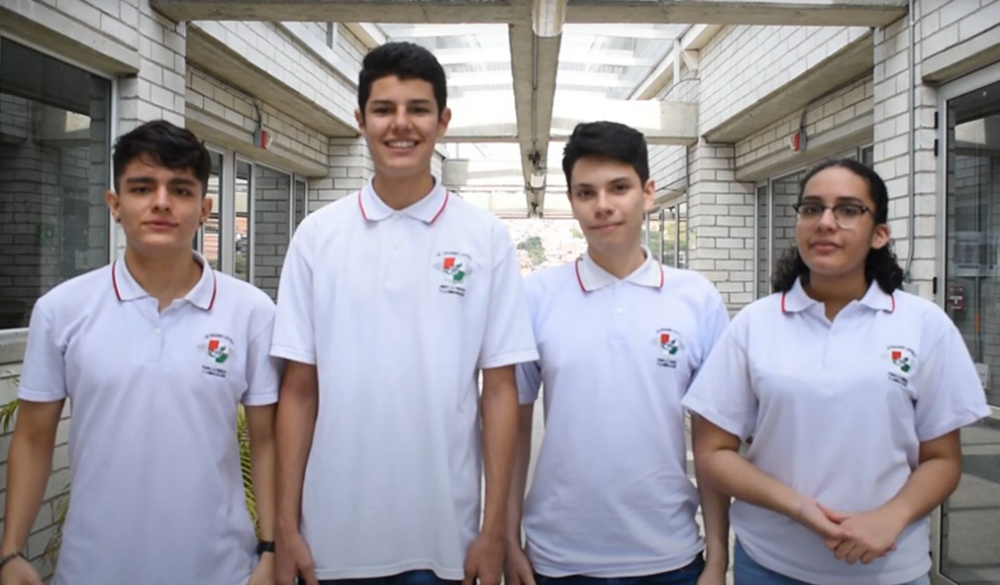 Ana, Santiago, Juan and Camilo, students from the science and innovation-specialized Colegio Loyola school in Medellin, singled coal out as the main culprit for air pollution and began searching for an eco-friendly energy source that could replace it. As they searched, the prospect of using leftover coffee grounds caught their attention. Colombia is the third largest coffee producer in the world, and thus has abundant quantities of coffee grounds available. A kilogram of coffee grounds contains energy equivalent to 18MJ,1 while coal contains between 18 and 25MJ.

The students launched their project under the name ‘Ciscombustible’ and threw themselves into the work. They researched, designed prototypes, developed and tested products and even created 3D frames to find out the optimal physical form for the fuel.

By bringing together their knowledge in the STEM (science, technology, engineering and math) fields, their problem-solving skills and their desire to help their community, the students were able to successfully create their coffee ground fuel. This innovative achievement resulted in them clinching first place in Solve for Tomorrow in Colombia.

“According to our research, it is expected that CO2 emissions from coal will account for 60 percent of total emissions by 2030,” related one of the students from the Ciscombustible team. “Our goal is to see the fuel source we have developed reduce CO2 emissions by 10 percent. We will maintain our passion for this work and continue moving forward until we realize our goal of protecting our environment!”

Access to clean water is essential when it comes to maintaining good health and preventing disease. However, getting clean water proves a difficult task in some areas of Paraguay where water sources are contaminated with pollutants and salt. 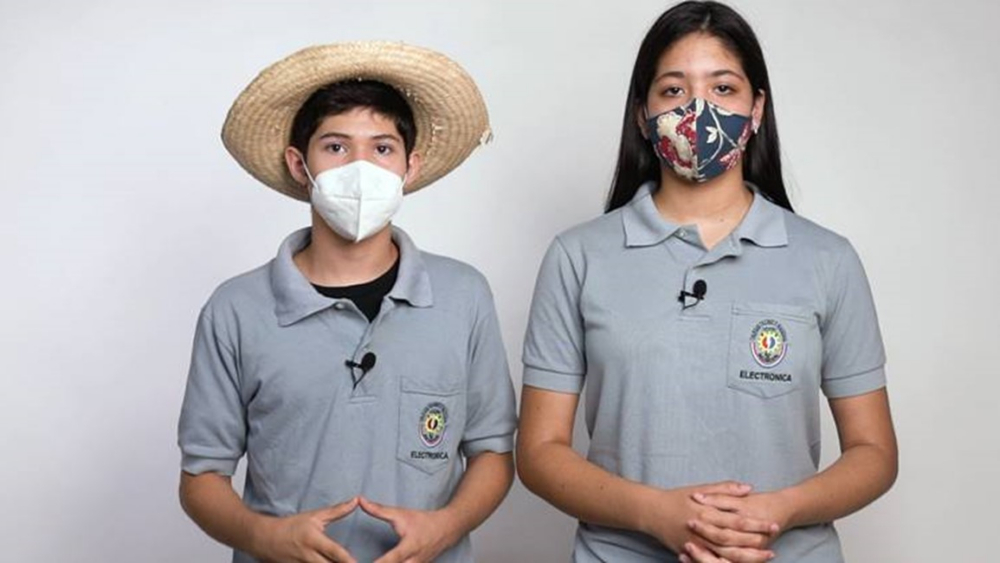 “There must be a way to provide clean water so that people can drink without having to worry.” This was the thinking of Paraguayan students, Jazmín and Diego. These two Solve for Tomorrow participants came up with a portable desalination device equipped with a solar panel and named it ‘MBARETICS’. This device, named after the Spanish word for ‘ICT’ and the Guarani word for ‘strong’, effectively eliminates impurities when filtering polluted water. As it does not require any electricity and can be carried around easily, the solution has been deemed particularly useful for those living in rural areas.

“Experts from local businesses and Asunción University provided us with useful advice during development,” said Jazmín. “The development process was challenging as we had to proceed with the project remotely due to the current health crisis. But it was still worthwhile in the end, as we were able to develop a solution that is meaningful to our community.”

Sokwei and Kai Lin, students from the Republic Polytechnic University in Singapore, believe that addressing climate change and enabling environmental sustainability are issues of the utmost urgency. As they looked into the causes of global warming, the pair discovered that huge amounts of chemicals are used and discharged into the air when leather is produced from animal hides. 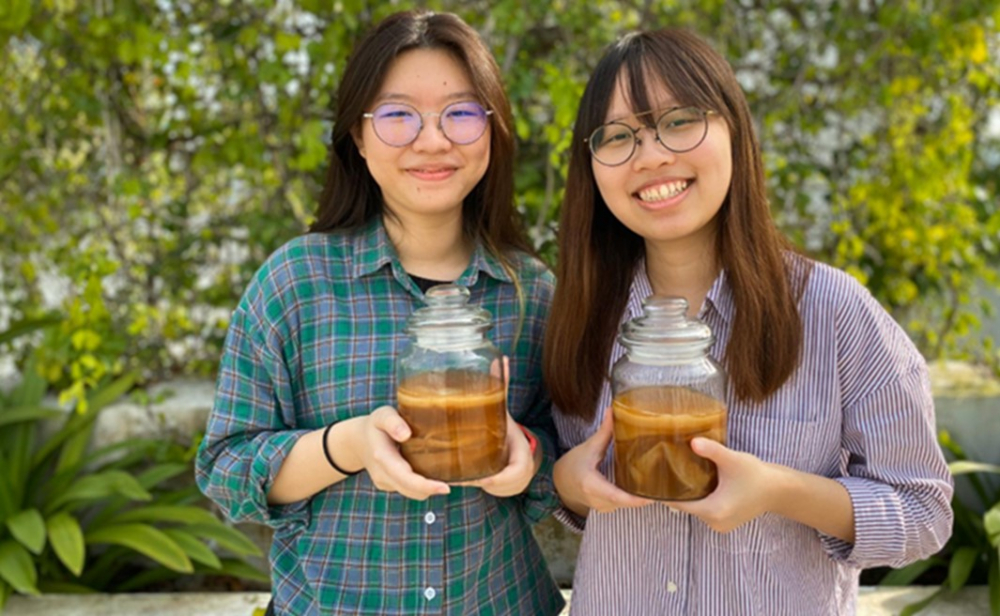 As they searched for a solution that would ensure quality as well as ethical and sustainable production, the pair discovered that food waste could be the answer. As Singapore produced more than 740,000 tons of food waste in 2019 alone, the students realized that it would be doubly good for the environment if the waste could be re-used for their purposes. After months of experimentation, they finally developed ‘SUSKIN,’ a 100% vegan leather made from food waste.

Since the two majored in consumer behavior studies rather than science, they faced many obstacles while seeking the right material and conducting experiments. Eventually, and despite a series of setbacks, they were finally able to create a vegan leather that was both durable and ethical.

The team credited Solve for Tomorrow for teaching them a variety of new things, and enhancing their problem-solving skills. They also mentioned that the program sparked an interest in social issues, and showed them how to tackle difficult tasks by themselves. Going forward, they plan to continue creating high-quality sustainable materials.

The students that participate in Solve for Tomorrow embark on challenging journeys to make the world a better place for everyone. Visit Samsung’s Corporate Citizenship website to find out more about how Samsung is supporting students through Solve for Tomorrow and its range of other programs.

1MegaJoules. 43.1MJ corresponds to one cubic meter of city gas.