Gamescom 2022, a five-day festival for over 265,000 gamers from around the world, was held in the historic city of Cologne, Germany, on August 24 through August 28. Cosplayers who dressed up as characters from popular games and movies, as well as video game enthusiasts from all over the world, gathered at Cologne Messe, where the Gamescom exhibition was held. 2022 marked a special year for Gamescom, as it was the first time in three years the event was held in person, inspiring more energy and connection from gamers than ever before.

At the event, Samsung Electronics debuted the Odyssey City booth as an ode to Gamescom 2022. Through this immersive, hands-on experience showcasing the new Odyssey lineup, visitors could see for themselves the next-level performance of the advanced gaming screens.

The moment they entered the Samsung booth, visitors were faced with the next-generation gaming screen Odyssey Ark, unveiled for the first time in the European market. Visitors navigated the booth by moving from the Odyssey Ark Zone to the Experience Zone, then to the Gaming Hub Zone, and finally to the Tournament Zone to watch exciting live gaming.

The audience was fascinated by the impressive size of the Odyssey Ark, measuring 55-inches, equipped with 4K picture quality and a high refresh rate of 165Hz. One visitor to the booth said he liked “the size because he is into photography and videography. Also, for gaming, it feels like a space station.” Another visitor tested the game Valorant on the Odyssey Ark and said, “it’s really good if you want to play the game while streaming, chat with Twitch on top of it and play music.” 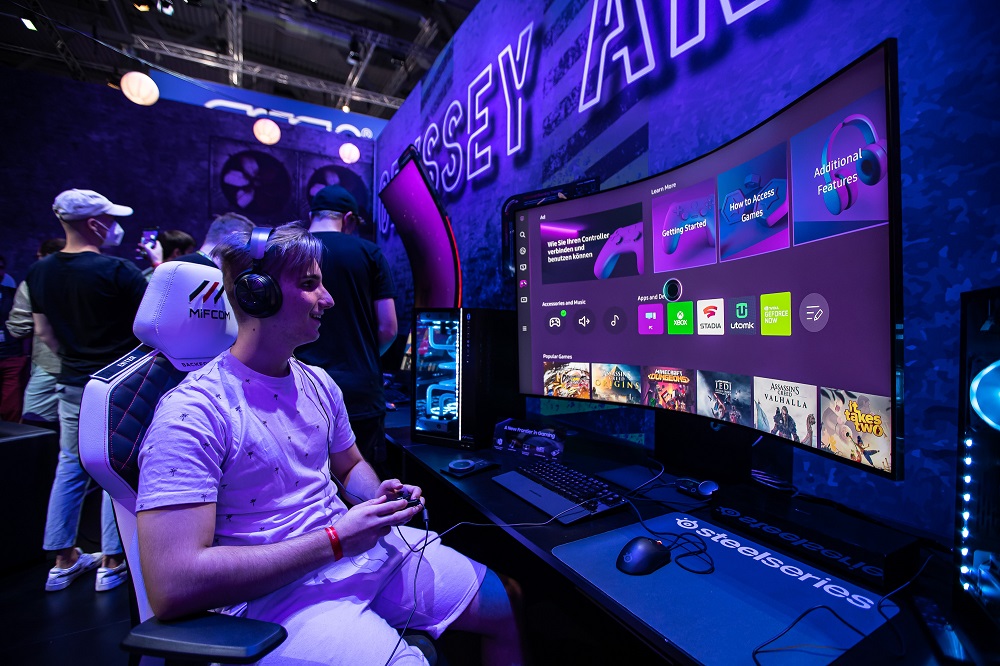 ▲ Visitors, influencers and famous gamers who visited Gamescom experienced the immersive design of the Odyssey Ark.

Another popular standout of Samsung Electronics’ booth was the Samsung Gaming Hub,1 an all-in-one game streaming discovery platform. This enables users with a Samsung TV or Odyssey lineup product that supports Samsung Gaming Hub — and a controller compatible with the gaming hub — to enjoy games with no downloads or storage space requirements.

After experiencing the Samsung Gaming Hub, visitors left with the feeling that “it is convenient because you do not need a separate device such as a console or PC, and you can start the game immediately after setting up Bluetooth if you have a controller,” which is ideal for easy game preparation. 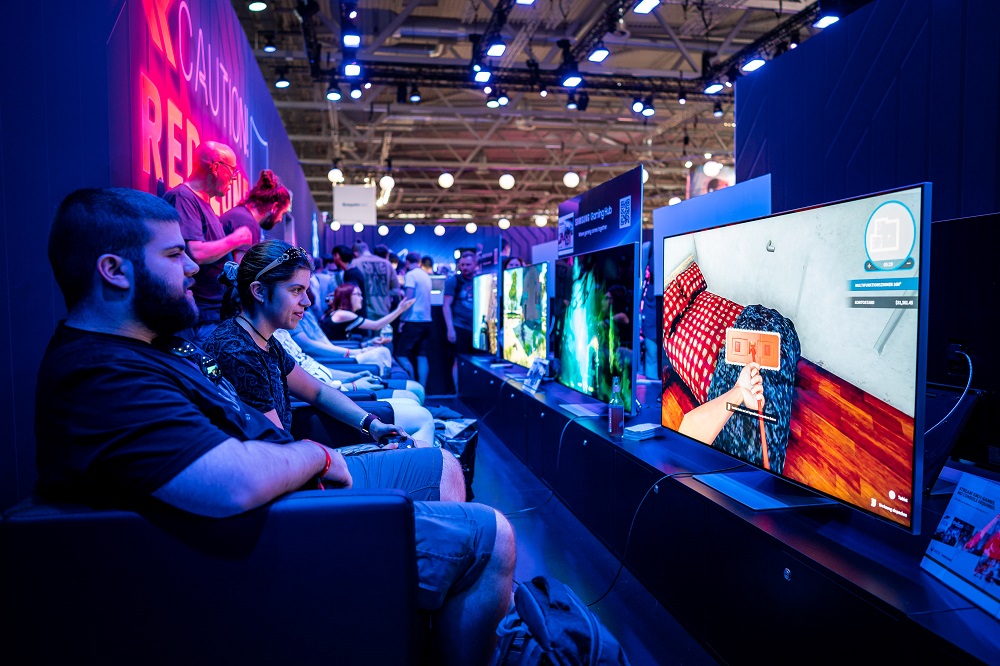 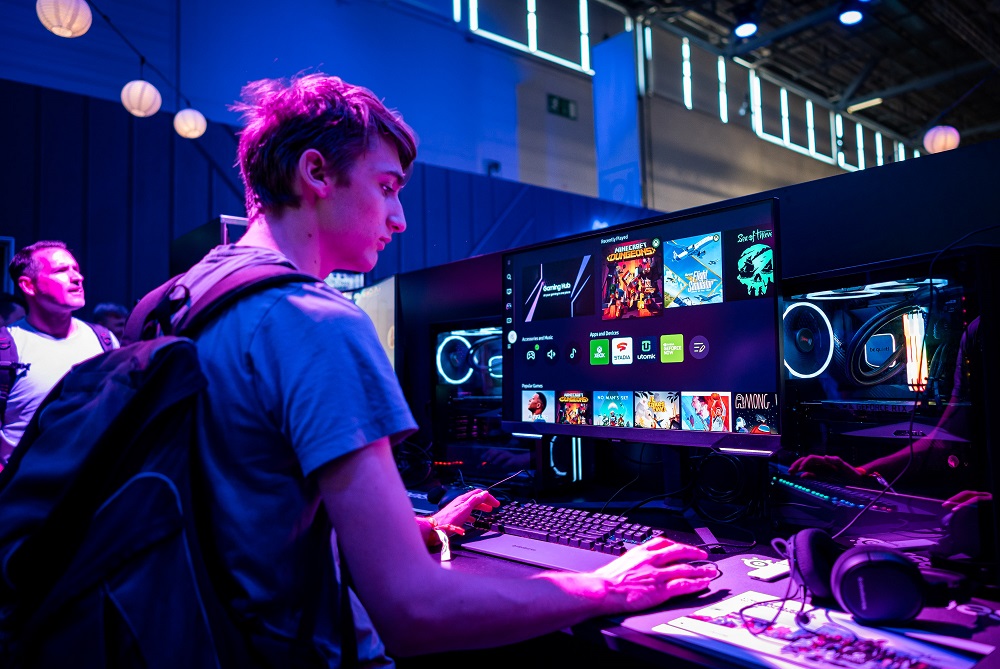 To get to know the gaming styles of Gamescom goers, Samsung asked a series of questions in a game of “This or That.” The questions prompted gamers to choose the first or second option for topics including “I play on PC vs. I play on console” and “game devices matter vs. game skills matter.” The most interesting finding from the game is that many gamers tend to multitask. In other words, they like to watch a video or listen to music while playing a game. This shows multitasking is emerging as a new trend as gamers play a variety of games at once or play a game while searching online for a walkthrough.

For a fun, interactive activity, Samsung engaged visitors in a quiz about the Odyssey lineup, giving prizes to those who guessed the most answers correctly. Questions included, “How many speakers and woofers are mounted on the Odyssey Ark?” Samsung knowledge pros won a prize for answering four speakers and two woofers. 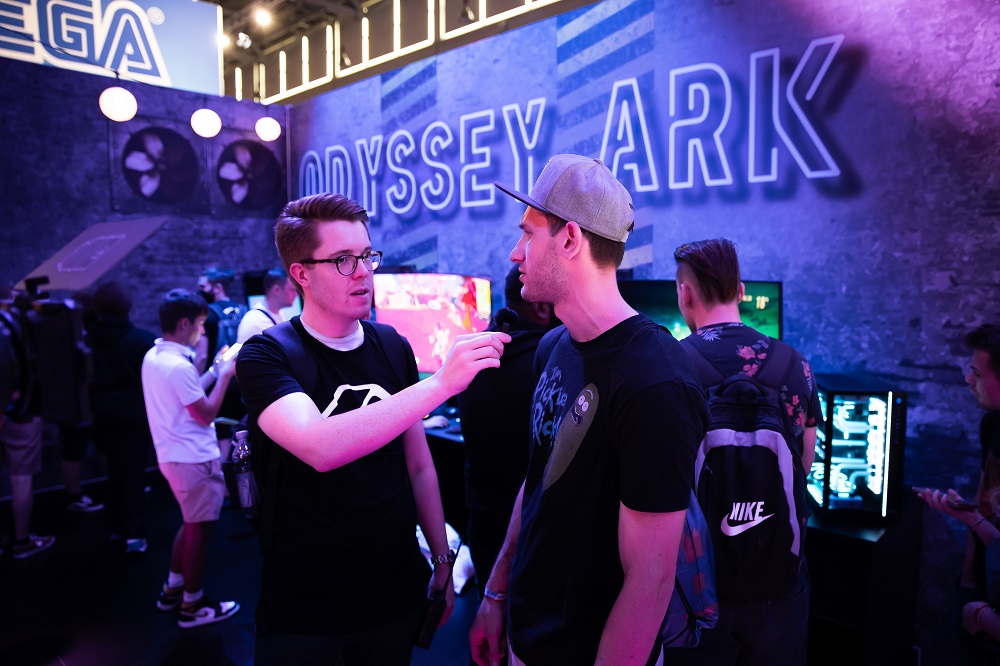 Get in the Game: Competitive Tournaments, 5 vs. 5 Battles and Talk Shows

Daily gaming tournaments were held during the exhibition in the Tournament Zone, featuring the Odyssey G4. All three days, there was a long line of gamers waiting to experience the outstanding performance of the Odyssey G4 up close and personal, which received rave reviews from critics. 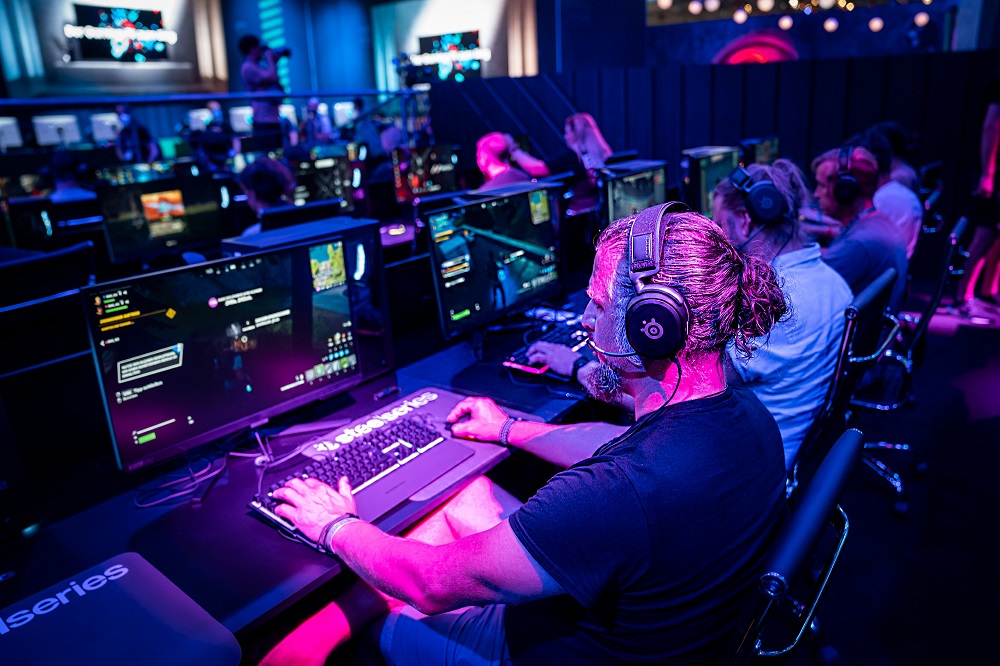 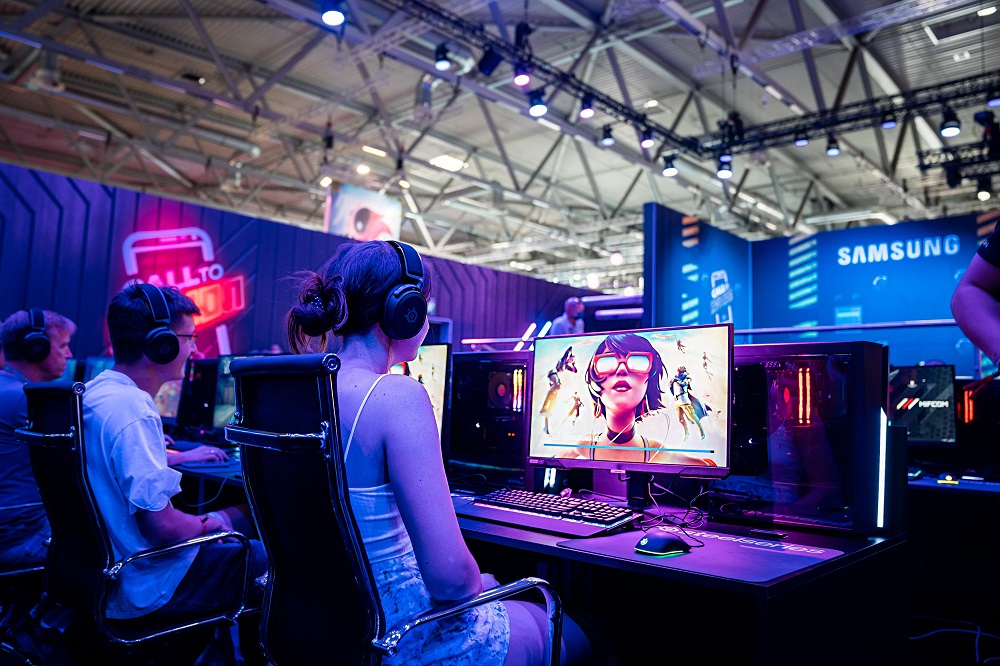 ▲ Spectators enjoy a game in the Tournament Zone where the Odyssey G4 is installed — competing against fellow visitors.

On the main stage, a five vs. five League of Legends (LoL) match was held with Odyssey Neo G8, where famous global game influencers and visitors participated. The match provided an opportunity to check out the superior performance of the Odyssey Neo G8, which supports 4K picture quality and a refresh rate of 240Hz. The 5v5 battle was broadcast in real time through large signage in the booth, and the audience joined in the fun by cheering on the gamers playing live. 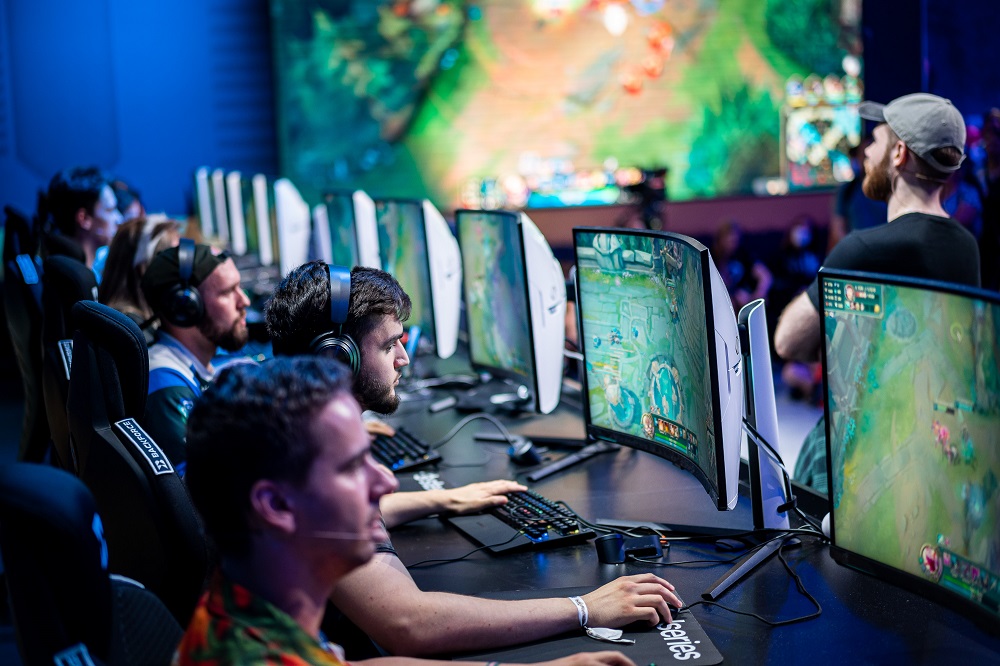 ▲ On the main stage, famous game influencers played League of Legends on the Odyssey Neo G8 while spectators watched intently. 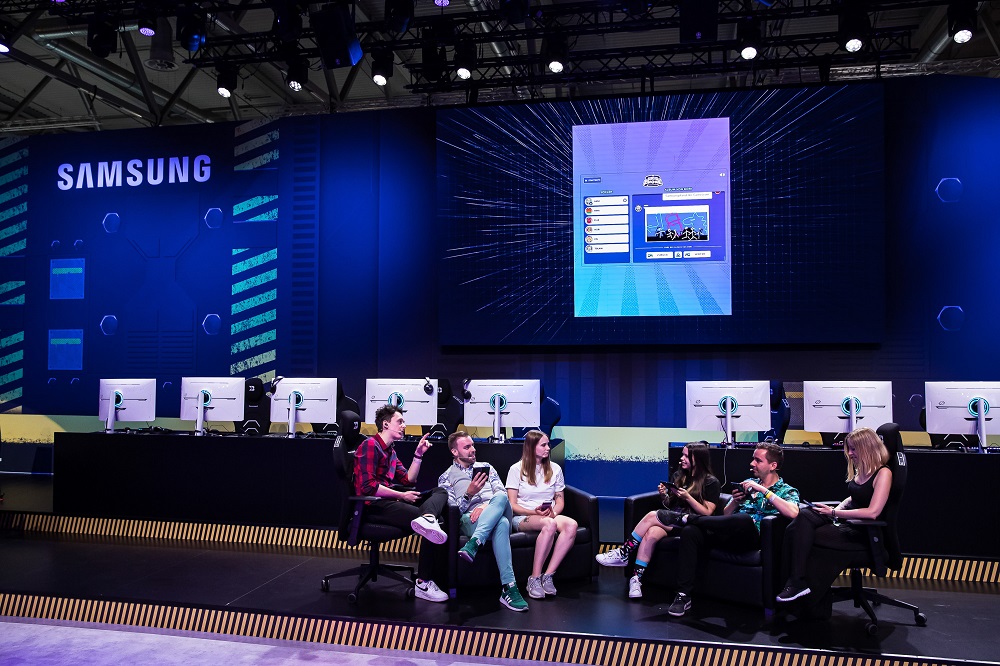 ▲ Throughout the exhibition, various programs were held for everyone to enjoy, such as game-related talk shows hosted by global game influencers and photo ops with audience members.

In addition to experiencing the new Samsung Odyssey lineup while exploring the Odyssey City, visitors to the Samsung booth got to enjoy live gaming matches and talk shows with global gaming influencers, including Maxim, Just Johnny, Sola and Tolkin. Overall, Gamescom goers who visited the Samsung Odyssey City enjoyed a unique and immersive experience and were delighted to see firsthand the next era of gaming powered by the new Odyssey lineup.