IFA 2022, Europe’s biggest home appliances trade show, was held in Berlin, Germany from September 2 to 6 and showcased many different environmental products from various companies, grabbing the attention of visitors from all over the world.

Samsung Electronics’ booth was no exception to this. One of the newest innovations at Samsung’s booth was the company’s new microplastic reduction washing machine. The washing machine was developed in collaboration with Patagonia and the Ocean Wise Plastics Lab, in order to address microplastic shedding, one of the main causes of marine pollution. 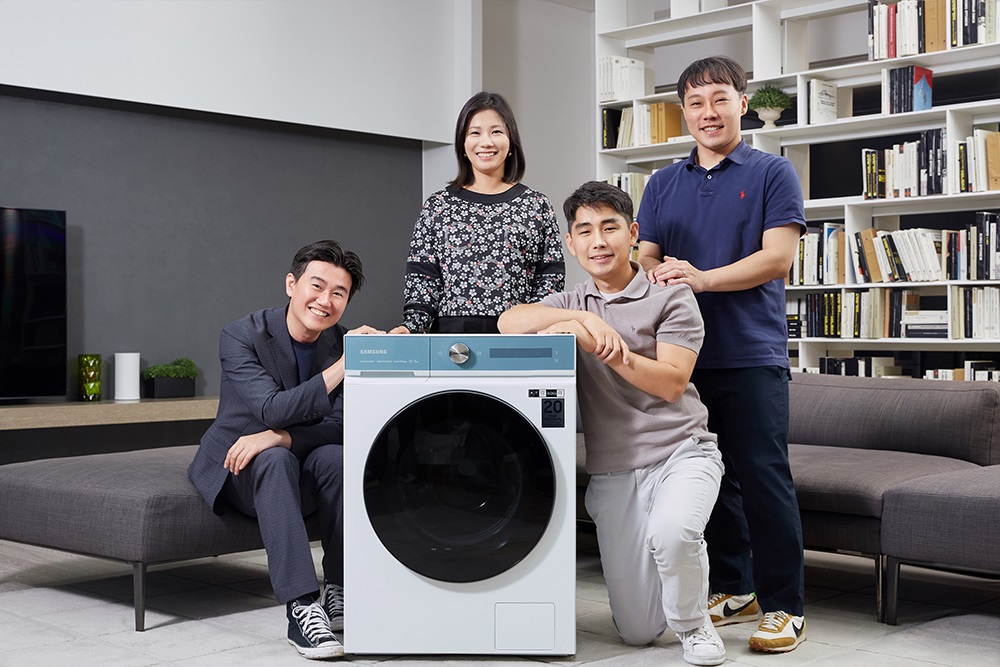 Global Cooperation With the Common Goal of Marine Environment Preservation

Early last year, executives from Samsung and Patagonia met to begin discussions on developing a solution to reduce microplastics that are shed from clothes when washed. Microplastics have a major impact on the environment, threatening not only the marine ecosystem but the health of the humans as well. It is estimated that the ocean floor alone is now home to over 14 million tons of microplastics,1 with 35 percent of marine microplastics coming from laundering clothes made from synthetic fibers.2 Scientists have also discovered that humans ingest the equivalent of one credit card of microplastics per week from the air we breathe and the water we drink.3 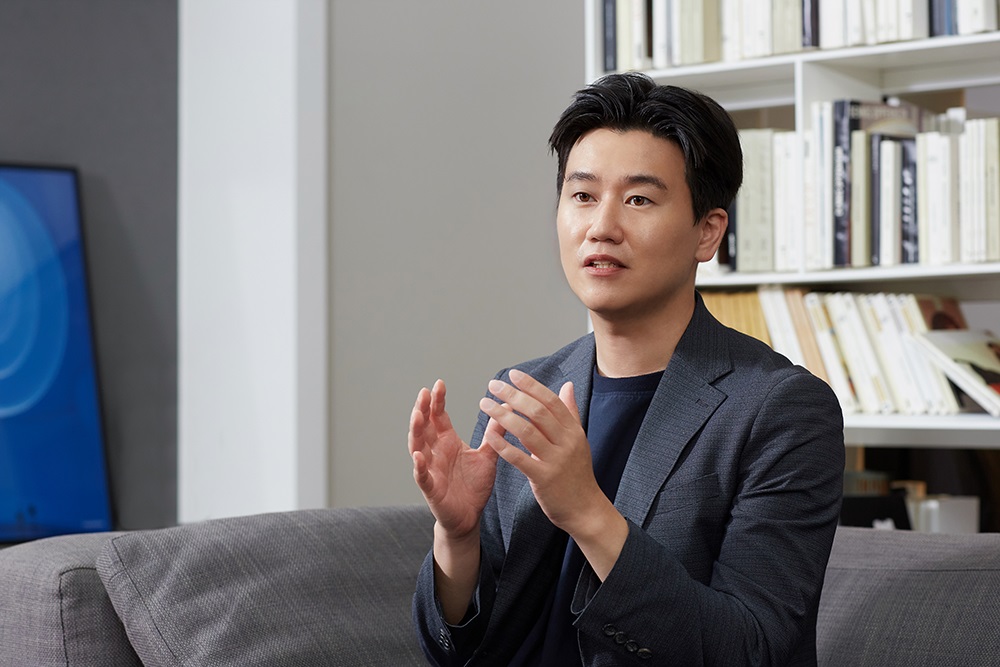 “Since Samsung’s Digital Appliances division was already conducting its own research to reduce microplastics, we were able to form a mutual understanding and agreed to work together quickly,” said Yoon, who acted as manager throughout the collaborative project. “The support from Patagonia heavily motivated us and gave us the confidence to accelerate the development of a practical solution and commercialize it.”

In order to accurately and objectively verify that microplastics were being reduced, the companies needed help from a research institute in the field. Patagonia introduced the nonprofit marine conservation research organization Ocean Wise Plastics Lab to Samsung. Samsung formed hypotheses based on various research materials provided by Patagonia and, with the help of Ocean Wise Plastics Lab, conducted actual tests to find the most effective laundering method for reducing microplastic shedding as well as the standard for measuring how effective the reduction was.

New washing machines are not the only ones to benefit as all connected washers will also gain access to this course by the end of the year through updates.

A year after the development began, Samsung finally succeeded in developing a laundry cycle that is specifically designed to reduce microplastic shedding by up to 54 percent.4 The unique technology both effectively washes clothes and reduces the release of microplastics, all while maintaining the quality of your clothes. 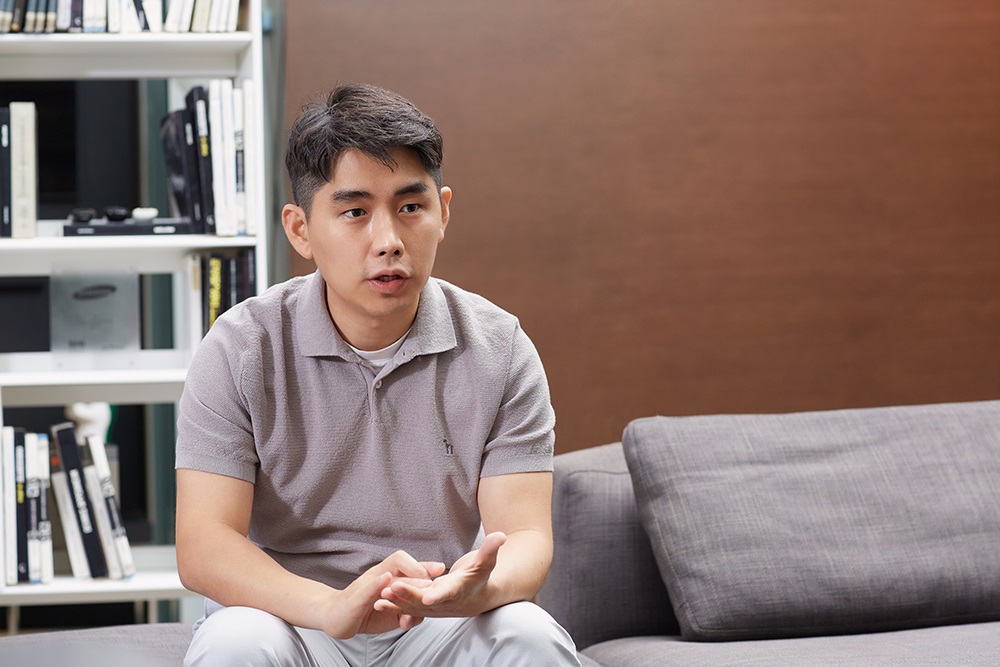 ▲ Wanhee Lee, who worked on the washing machine’s development and performance in the project

“Samsung’s proprietary Ecobubble™ was utilized to reduce the emission of microplastics,” said Lee. “Ecobubble™ enables laundry detergent to be dissolved and absorbed by the water quickly to effectively remove dirt and stains. So, it minimizes the abrasion of clothes, which is the main cause of microplastic shedding, and it protects the fabric as well.” He added, “Ecobubble™ effectively cleans clothes even when using cold water, which requires up to 70 percent5 less energy.”

Sincerity, Expertise and Hope as the Drivers for Success for the Future Generation

Aside from simply creating a new product for consumers, the collaborative development is a meaningful and proactive move to preserve the health of the marine environment and as such has garnered a lot of attention. Despite the project’s success, there were difficulties to overcome throughout the course of development.

“There was no standard for measuring the effectiveness of microplastics reduction from laundry in the first place,” said Lee when sharing the difficulties he faced during the initial development process. “We had to start by exploring and questioning the basics, such as how to collect microplastics from a vast amount of water from laundry, which ingredient would be most effective, how to execute each step of the plan, how to design the washing machine and more,” he explained.

“It was not easy for the employees of different companies with different corporate cultures to see the issue from the same perspective,” Yoon said. “But in the end, we were able to achieve a good result because all our expertise came together, including the clear direction of the project based on Patagonia’s support and Ocean Wise Plastics Lab’s technology to measure the reduction of microplastics,” he said.

A Courageous Attempt That Prioritizes the Impact on the Environment 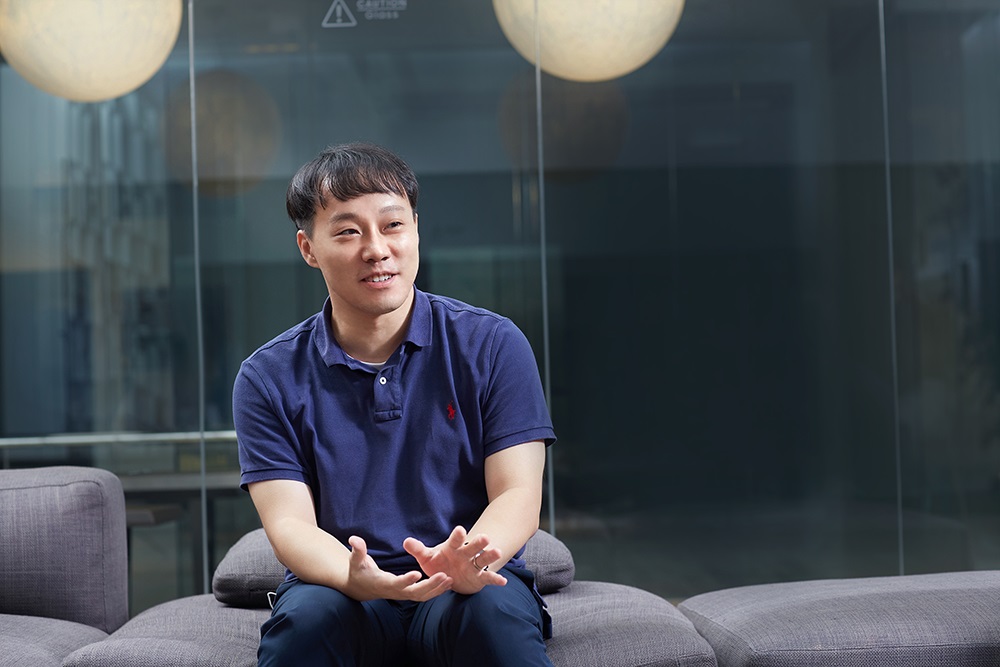 ▲ Woong Choi, who worked on product planning in the project

“I thought that washing machines had an indirect effect on the environment through the pollutants in the laundry wastewater or through electricity energy consumption,” said Choi who was in charge of product planning within the project. “But once I saw the actual figures of the effects, I was quite shocked. The fact that Samsung made a proactive move by cooperating with a global clothing brand and an environmental organization was such a courageous act, especially since it is not easy for anyone to address the issue of microplastics,” he added.

“When it comes to talking about the microplastic reduction washing machine, we have to start from the fact that microplastics are discharged in the course of laundry at all, which may not be a comfortable topic from a manufacturer’s perspective,” said Park who worked on communications and marketing for the project. “However, we prioritized the impact on the environment and developed a product that can contribute to the protection of the marine environment. I’m proud to have been involved in the entire process of this meaningful project.”

“From the marketer’s perspective, it is of course important to let consumers know how good this project is and how it is different from other projects. But at the same time, I hope consumers can also see our values, including our sincere concern for the environment and our courageous attempt as well,” she added.

Continuing Solution Development and Open Cooperation for a Healthy Environment

These days, consumers are becoming more interested in environmental products. When asked about their plans and goals going forward after working on this project, the interviewees expressed their desires to further the project’s impact.

“Furthermore, in October in the European market, we’re going to release the Bespoke AI washing machine, which uses 10 percent less electricity than the criteria needed for an A Grade rating under the new European energy labelling system. It will also be released in Korea as well afterward.” 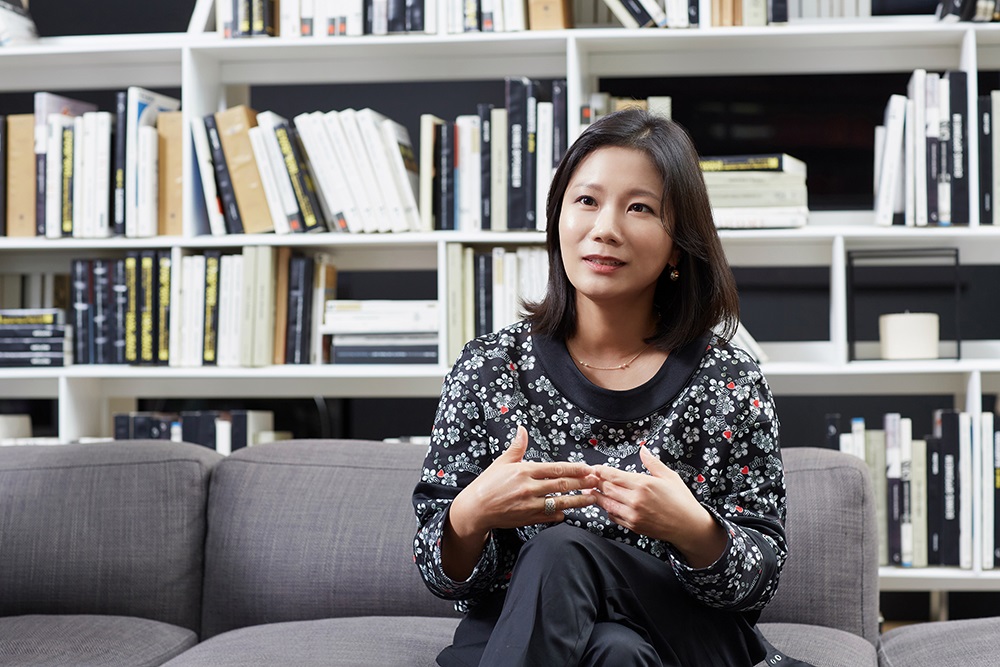 ▲ Josephine Park, who worked on marketing in the project

Finally, the interviewees offered some tips about how consumers can help to protect the environment while doing laundry.

“In many cases, people tend to use too much detergent when washing clothes,” Park said. “But it’s better to reduce the amount you use to an appropriate level. Samsung’s washing machines have an AI Wash mode that measures the weight of the load and the level of soiling to automatically use the right amount of detergent. I highly recommend users use this feature.”

Through IFA 2022, Samsung not only showcased its microplastic reduction washing machine but also emphasized its vision for sustainable living by showcasing environmental products and solutions. Samsung will continue to work to make the planet healthier by both reducing its environmental impact and helping users do the same through new partnerships and innovative products.

2 According to a paper cited in the 2017 report of the International Union for Conservation of Nature (UCNI), laundry (microfiber) accounts for 35% of the cause of marine microplastics.

3 “No Plastic in Nature: Assessing Plastic Ingestion from Nature to People,” World Wide Fund For Nature (2019)

4 Tested with 2kg load of 100% polyester hoodies, comparing Synthetics cycle on Samsung Conventional model WW4000T and the Less Microfiber cycle on WW7000B. The results may be different depending on the clothes and environment. Tested by the Ocean Wise Plastics Lab.