On October 12, Samsung Electronics will host the Samsung Developer Conference 2022 (SDC 2022) in the U.S. Through this year’s SDC, Samsung will showcase its latest updates that seek to create even smarter user experiences by intuitively and organically connecting various devices. By providing upgraded, next-generation connected experiences, the role of the operating system (OS) has become even more important.

Samsung recognized the importance of OS early on and subsequently began research and development. In April of 2012, Samsung unveiled the first version of Tizen, a Linux-based open-source platform. 10 years later, at this year’s SDC, Samsung will unveil its new vision for Tizen 7.0.

▲ The team behind the research and development of Tizen OS at Samsung Research: VP Jinmin Chung, Head of the Platform Team (center), and researchers Seonah Moon of the MDE Lab (left) and Jin Yoon of the Tizen Platform Lab (right)

Since the first version of Tizen was released, much time has passed and Tizen has evolved in a variety of ways. To learn the details behind the development of Tizen, Samsung Newsroom met with Samsung Research’s Vice President Jinmin Chung and researchers Jin Yoon and Seonah Moon, who have been working on Tizen since the beginning.

The First Step in Providing a Universally Connected Experience

Tizen is a Linux-based open-source platform led by Samsung and it also supports all types of smart devices. With the aim of being utilized in various types of Samsung products to support smooth product operation, Tizen has been equipped in about 330 million smart devices as of the end of 2021. 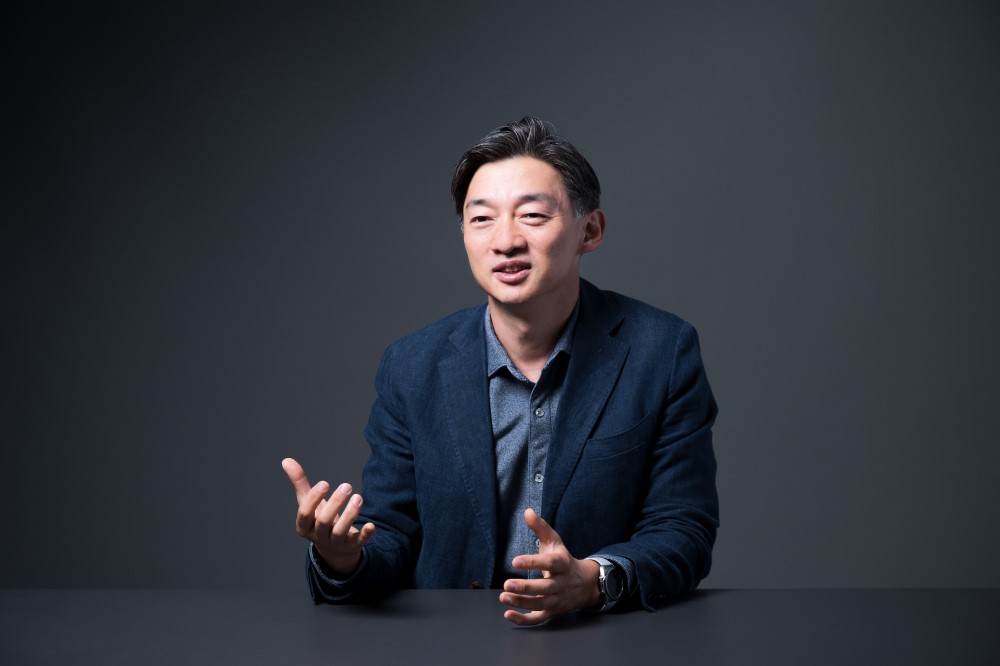 “We needed Tizen to differentiate Samsung’s devices from others and to provide a different service and user experience,” VP Chung said. “It’s already been 10 years since Tizen was first developed. We experienced challenges in the initial development stage, but we felt supported by the people who believed in the possibility and usability of Tizen and rooted for us. We focused on the research proudly knowing that we were leading Samsung’s own independent OS development project,” he added.

In 2014, for the first time, Tizen was equipped in Samsung’s Gear 2, a wearable device, proving its viability through its commercialization. Furthermore, a year later, Tizen was used in the 2015 Samsung Smart TV product line up that set a new bar of smart TVs.

Tizen has many advantages that enable it to offer the highest performance across Samsung’s devices. First, Tizen’s flexibility allows it to be easily applied to a variety of smart devices. In order to make this possible, Tizen went through multiple platform improvement processes. Several profiles were established based on the different types of products. Then, Tizen Common, which is the common module for all products, and the Specialized Module, which is needed for certain products only, were created. The structure is designed in a way that allows the platform to be quickly modified and applied to new products as well. This enables Tizen to be utilized in a wide range of products, including smart TVs, refrigerators and air conditioners.

Additionally, Samsung utilized its advanced know-how and experience in commercializing embedded system software when developing Tizen. The Tizen platform is optimized to perform well while using minimal memory and low power. It’s an open-source platform that can be used by anyone, and it supports optimized performance for immediate commercialization.

Tizen is also convenient for new product development because it is Samsung’s own independent OS. The platform can be modified as desired to add new features and services to products in a timely manner. 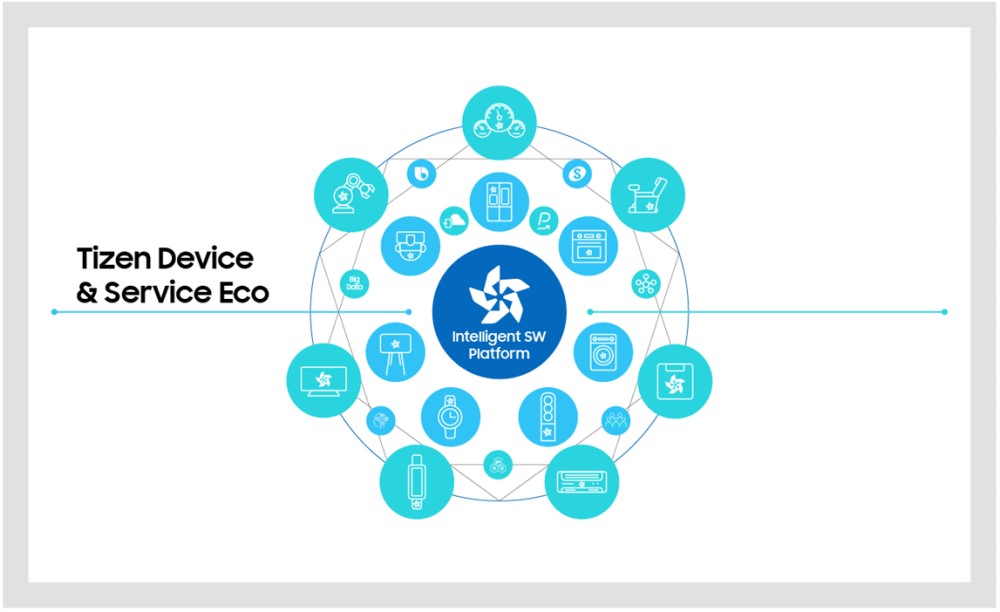 “Across the world, only a handful of companies own their own independent OS,” Chung said. “The fact that Samsung has its own OS called Tizen means that Samsung has become a company proficient in developing not only hardware but software as well,” he emphasized.

The People Behind Tizen: 10 Years of History

Many developers put much effort into the development and evolution of Tizen. 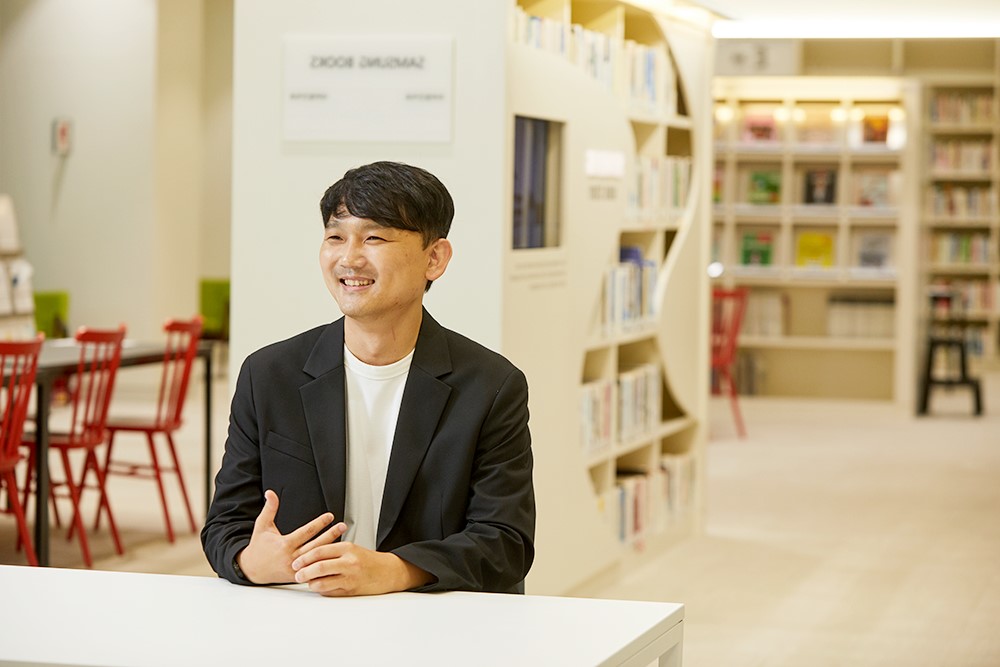 Researcher Jin Yoon has been participating in the Tizen project since its early stages, meaning he has witnessed the growth of Tizen firsthand. “Starting with Smart TVs, the applications for Tizen are gradually increasing, and the system is evolving and advancing further,” Yoon said. “In addition, the implementation of a new development language, framework and infrastructure makes development more convenient and increases the productivity of developers. Now, we’re working hard to secure usability that is appropriate for each product group that uses Tizen,” he continued.

“The code sources of Tizen are very stable because they’ve gone through actual commercialization. On top of that, they come with performance-specific details and security as well. This means third party developers can trust and find these sources,” Yoon said. 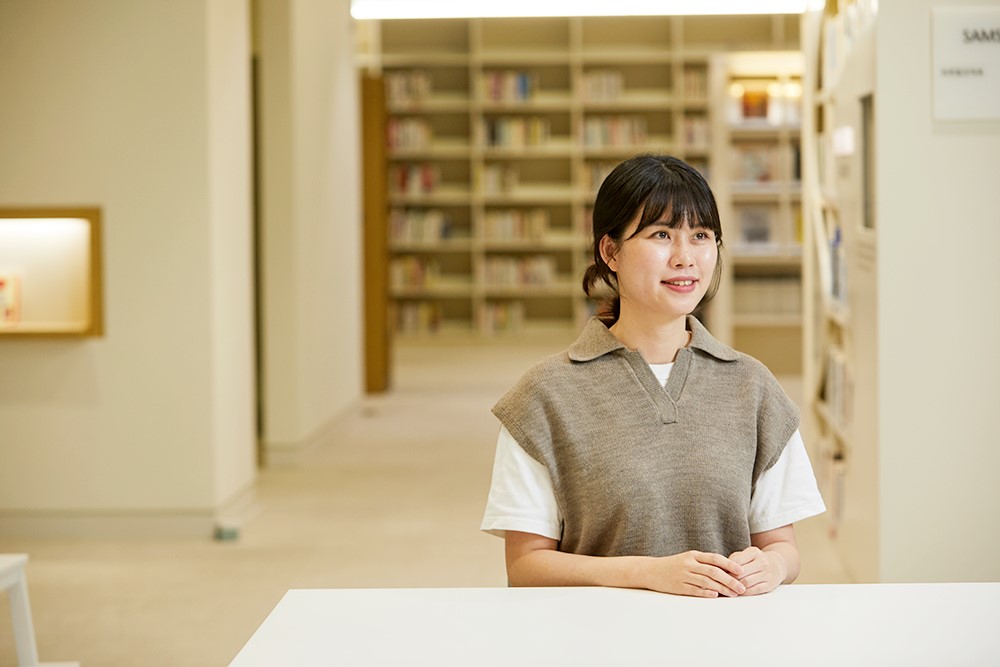 Expanding the application of Tizen to more devices and creating an ecosystem for Tizen is important for improving the usability of a product, but active participation in open-source communities is also crucial. This is because open-source communities enable community members to share problems and come up with solutions together, directly contributing to the improvement of software. In order to manage this, Seonah Moon from the MDE Lab, who’s been developing Tizen for eight years, is responsible for tasks involving open-source maintenance. Countless open sources were also used for Tizen’s development. Moon monitors each open source, analyzes its errors and shares her opinion on them to help outside developers access Tizen more easily.

A Bridge That Connects All of Samsung’s Products Together

Tizen is more than just an OS for Samsung’s developers and researchers. 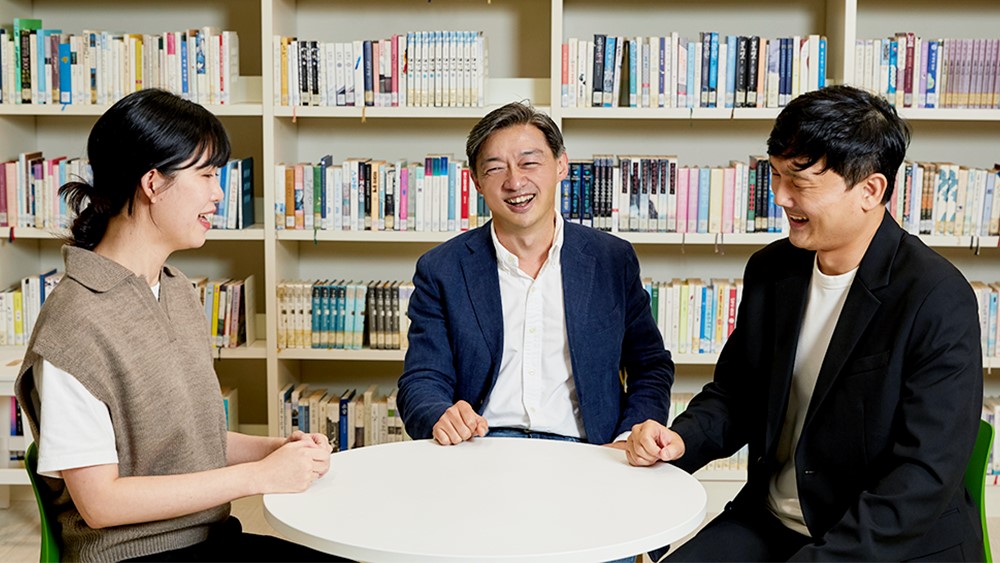 Since the platform’s development requires constant maintenance, this means developers must continue to hone their skills. Tizen motivated each member of the development team to continue learning and improving their software skills. The developers of Tizen have grown into experts specializing in different areas. Since the team’s initial start, they have grown to accumulate many platform codes over the last 10 years. They also constantly learned by voluntarily participating in study group meetings.

“Tizen is like a bridge that connects all of Samsung’s products together,” Moon said. “Cooperation among business divisions is a must for utilizing the OS in different products. Through this cooperation, we can share our development knowledge with one another and also create a new service based on our OS,” Moon continued.

An Interconnected Device Experience With Tizen

Tizen has continued to evolve to allow all devices around us, including wearables, TVs, refrigerators and even robot vacuum cleaners, to provide new user experiences. When asked about what the future of Tizen will look like, the developers explained their ambitions to continue connecting devices using Tizen. 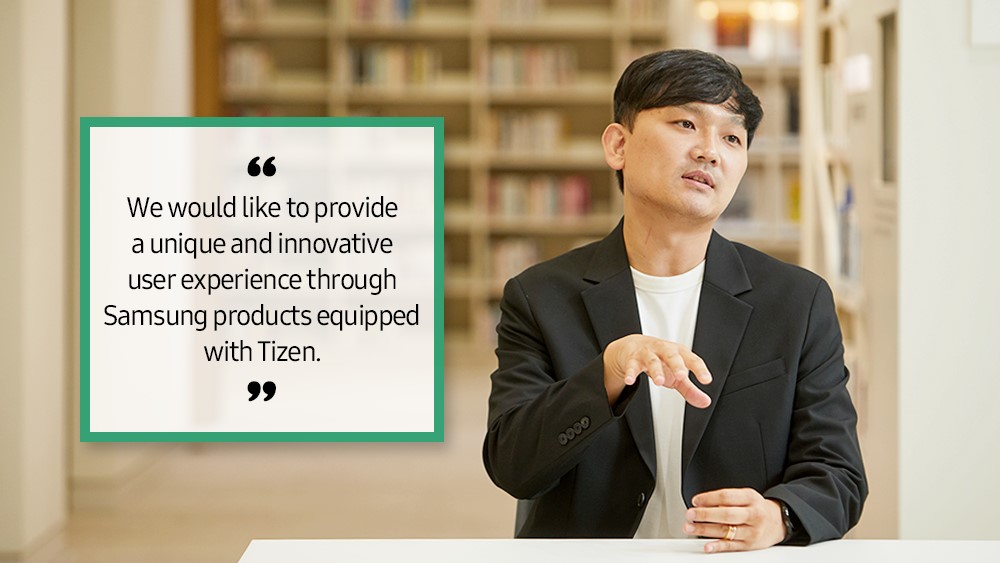 “We’re now living in an era where everything is connected to one another through the Internet of Things (IoT),” said Yoon. “By increasing the productivity of Tizen app development, I’d like to provide an innovative user experience where all Samsung products are connected to one another, creating an interconnected product ecosystem,” he explained. 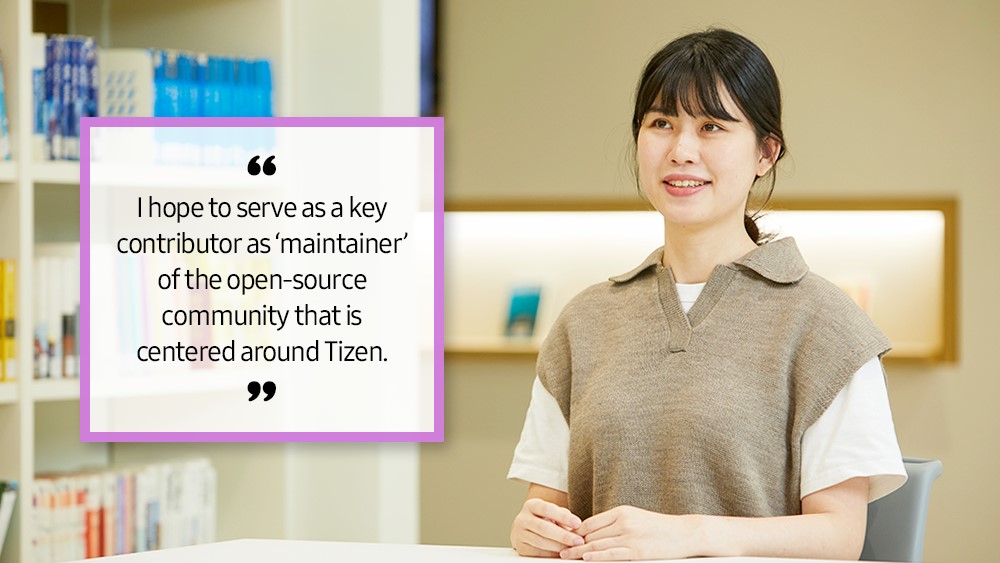 “I’d like to lead the efforts in expanding Tizen’s use in a variety of ways by discovering new scenarios and utilizing even more advanced technologies,” said Moon when explaining her ambitions. “By growing together with Tizen, I’d like to become the ‘maintainer’ or the key contributor to the open-source project,” she continued. 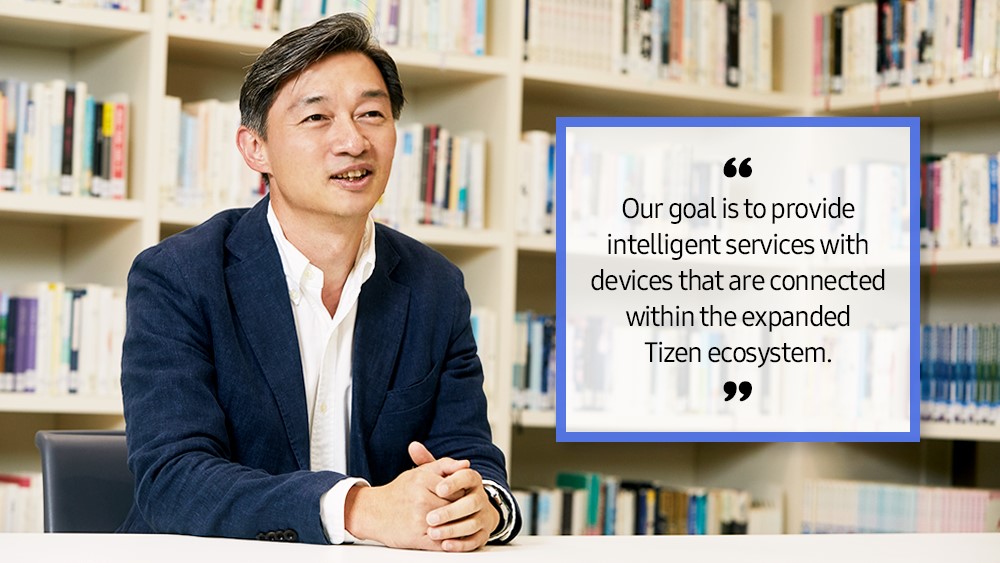 “I dream of a future in which Tizen is equipped in all the devices that people use in their daily lives, enabling various devices to operate organically as if they’re one and providing intelligent services, like the metaverse,” Chung said. To enable this, Samsung Research is developing various technologies with many teams in order to manifest a future in which various Tizen devices are all connected through the OS, providing a Multi-Device Experience (MDE), modular AI and more.

The infinite possibilities of Tizen will be showcased at SDC 2022 this year. At the conference, Samsung Research will share how easy it is to make new devices based on the flexibility of Tizen 7.0, and how the new version of Tizen can strengthen intelligent services. As it continues to evolve in line with the era of hyper-connectivity and intelligence, the future of Tizen is bright and its applications are limitless.